Christel Schneider will be presenting a paper on behalf of the GUINEVERE Project at the 12th edition of Innovation in Language Learning in Florence, Italy. The paper to be presented at the conference, entitled „Classification of games to be used in Virtual Learning Environments: Some reflections based on the EU-funded GUINEVERE Project“ by Prof. Dr Michael Thomas, Christel Schneider and Dr Tuncer Can is published in the Conference Proceedings e-book entitled “Innovation in Language Learning”.

During the summer holidays the Guinevere Minecraft Server was made available for children to play around and for the project team to get an idea what the kids  wanted to do in the game. Four children between 10 and 12 years from Egypt, Spain, Thailand and Germany joined GUINEVERE’s Minecraft server. All appeared to be excellent Minecrafters, amazing  us with their ideas and fantastic builds, creating their own games, without the need to follow any instructions the GUINEVERE team provided them with. The children communicated in English and it was remarkable to see their improvements language wise just by interacting with each other.

We were grateful to have Brant Knutzen PhD, presenting “The Agency” on behalf of the Guinevere Project on Friday 29th June where we met in Brant’s Virtual Adobe Room to start the session off. After a short introduction to Brant, he introduced the audience to Venice in 1600 and invited everyone to get dressed accordingly. For more information check the webinar page

Chris McGuirk, a lecturer in ESOL/EFL at the University of Central Lancashire gave a very inspiring and thought-provoking talk on The Quest for Learning: discussing learner motivation paradigms in an online gaming space which triggered a lot of interest and discussion. The webinar was delivered in cooperation with SIG Virtual worlds & Serious Games Eurocall/Calico on 11th May 2018.

Our April Webinar with Barbara McQueen on Thursday, 19th April 2018 was very successful. After her presentation in Adobe Connect, Barbara demonstrated the potential of digital game-based learning in 3D immersive environments. It was a great opportunity to try out games developed by Barbara in Second Life and two attendees had great fun in trying to complete a tree house, while one player giving instructions whereas the other player had to follow them.

The Guinevere Open Sim Grid also has its own server now. The game park is continuously growing with quizzes, scanvenger hunts, games and more and will be set up for a variety of languages.  For now we have already created an English corner with some games  to try out.

One of the highlights in February was our first webinar with Matthew Ward, founder of Club Minecraft was very inspiring for project partners to get started with building in Minecraft. In his introduction to Club Minecraft Matt and a number of mini games Matt demonstrated his enthusiasm and passion for working with young minds
which is reflected in the snapshots demonstrating the fascination and engagement of the kids and their playful learning with technology.

The January newsletter was devoted to the kick-off meeting in Preston and establishing a working base for all partners. GUINEVERE Island was set up on OpenSim providing a variety of games for students. Further games on this and other platforms are planned and different languages will be catered for. 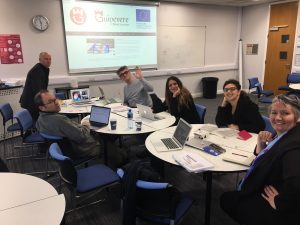 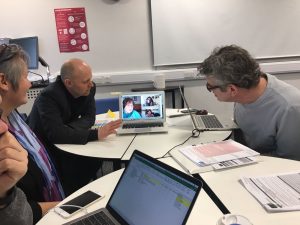 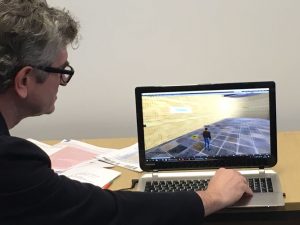 Project Partners at the GUINEVERE kick-off meeting at the University of Central Lancashire, Preston, UK (19 – 21 January 2018)